AliExpress was launched in 2010 and in over a decade, has become one of the leading online stores worldwide and arguably the number one store that comes to mind when you think of where to buy something cheap.

AliExpress is a subsidiary of Alibaba – an e-commerce marketplace that connects manufactures and suppliers to retailers and have been around since 1999.

The growth AliExpress has enjoyed in the ecommerce industry is something to admire despite coming more than a decade later than the leading online stores (Amazon and eBay) which started in the late 1990s.

So far, AliExpress has penetrated 1/5th of the global online shoppers and has become a to a new ecommerce trend called dropshipping.

As a matter of fact, if you put into consideration the number of people that buy through dropshipping stores, who, indirectly are buying from AliExpress, the penetration of the AliExpress in the global ecommerce industry will be much higher than it is estimated to be.

In this statistic roundup, you will learn:

So, without further ado, let’s jump right into it.

A bit about AliExpress

AliExpress is a China-based ecommerce website and owned by Alibaba group and was launched in 2010. It is an online retailer that enables small businesses to sell their products to customers all around the world. It was named the most visited e-commerce site in Russia and 10th most popular in Brazil. Through its platform, sellers can reach buyers from different countries. It has been compared to eBay due to how independent sellers can offer their products to buyers.

How Many People Use AliExpress?

According to the information available at Similarweb, AliExpress has just over 400 million monthly active users. This places AliExpress 4th on the list of most visited global e-commerce website. Behind Amazon, eBay and Walmart.

AliExpress ranks 4th on the list of 10 most visited online stores in the world. Behind Amazon – 3 billion, eBay and Walmart – 500 million. 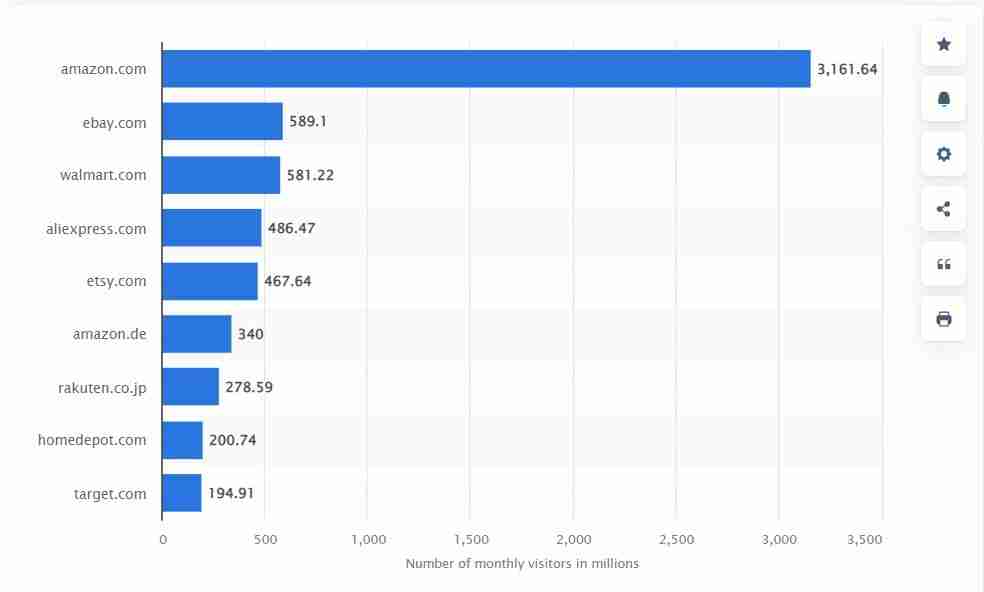 Other stores on the list include etsy.com, Rakuten, Homedepot, and Target.

“In the fiscal year ending March 2020, AliExpress revenue for Gross Merchandise Value (GMV) reached a historic $1 trillion. According to the company’s Chief Executive Officer Daniel Zhang, its 960 million customer base worldwide made it possible for digital sales to continue to rise amidst the pandemic.”

That’s the end of our statical roundup of AliExpress users.

It is impressive how AliExpress has grown over the past decade, despite being relatively new in the industry compared to its major competitors.

Over to you, what do you think of AliExpress with the information you have learned here?

Big Saving!
Get up to 70% off with the AliExpress weekly deals. Low price for 30 days.
ACTIVATE DEAL
Best value
0

Big Saving!
Use this Aliexpress new user coupon to get $25 off your first order over $150.
ACTIVATE DEAL
Reveal coupon
0

Big Saving!
Use this Aliexpress new user coupon to get $12 off your first order over $80.
ACTIVATE DEAL
Reveal coupon
Show next

Are AliExpress and Alibaba the Same? Here's What You Need to Know

All Your Questions About AliExpress Answered

Are AliExpress Clothes Good? Here is What You Need to Know

Are AliExpress and Alibaba the Same? Here’s What You Need to Know

We will be happy to hear your thoughts

New User Offer: 15% OFF Your First Order on Zaful

All Your Questions About AliExpress Answered

FAQs, How To, News, Reviews, Shopping

Are AliExpress Clothes Good? Here is What You Need to Know

Are AliExpress and Alibaba the Same? Here’s What You Need to Know

AliPromo.Codes is the best place to get coupons, deals and promo codes for global online retail stores such as AliExpress, DHgate, Zaful and many more. We scout the web for you and bring the best working coupons at your fingertips. All coupons and promo codes are 100% verified.

AliExpress Weekly deals: Up to 70% OFF